Saturday I decided to travel to Casablanca with a friend to check out what all the hype is about Morocco Mall, which just opened to the public a couple weeks ago. Apparently, we weren’t the only ones who had the idea. Luckily, we got there in the morning and didn’t have trouble getting in, but when we left around 5PM, there was a long line leading to the front door. It’s been a while since I’ve been in a ginormous mall like that (since my middle school band trip to Mall of America). I heard it’s the fourth largest in the world.

Strolling into the mall, it was pretty amazing to see the glittering store signs of all the major European and American brands, such as Payless Shoes, American Eagle, H & M, and Gallerie Lafayette. For many of these stores, this was their debut appearance in Morocco. Unfortunately, it wasn’t just fashion the mall shared with Paris, but the price tags too. …Continue Reading

Facade at Entrance to Morocco Mall 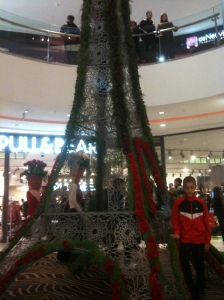 Eifel Tour figurine inside the mall

The crowds inside Morocco Mall

END_OF_DOCUMENT_TOKEN_TO_BE_REPLACED

On a Saturday night a few weeks ago, I attended a Latin festival in Tangier, in the Northern tip of Morocco, where Spanish mostly replaces French as the second language of choice. The festival, “Tanja Latino” took place in a beautiful Italian palace. On the ground floor, there were tango and salsa lessons, and on the top, there was live music and partying.

The demographics of the festival were interesting: There was a wide range of ages, from tweens to their grandparents. I didn’t see any other Americans or any real Latinos other than some of the performers. In attendance were mostly French and some Spanish-speaking expats or visitors, as well as many Moroccans of the secular elite. I describe the Moroccans as such since the entrance fee was rather steep, and there was alcohol being served. And I was surprised by how many people could really dance… Apparently, salsa is very much an “in-thing” amongst certain segments of the Moroccan population. Anyways, I had fun.

At Tanja Latino, a colorful group from the South of France performs a drumb routine, influenced by African and Brazilian beats

Overlooking Tangier, morning after the festival

A few weeks ago, I travelled from Morocco to the UK, via the sea and Spain. Well, by the UK, I mean Gibraltar. Lest you think this doesn’t count, it was very British indeed. As the postcard I bought there says: “British we are, British we stay.”

Upon arrival, I tried to use a pay phone, but it only took British pounds, not Euros. And then I couldn’t charge my phone because the plugs were British. At least they drive on the right side of the road. (According to my guide, they wisely made that change in 1929). On the plus side, I very much enjoyed the fish & chips and selection of British chocolates.

The journey from Africa to Europe began with a 45-minute ferry ride from Tangier in the North of Morocco to Tarifa in the South of Spain– an easy feat with an American passport. On one hand, one does see a blending of cultures on both sides of the sea: The clear Spanish influence on Tangier, and the Moroccan cafes and Arabic script I spotted upon arrival in Tarifa. But on the other hand, the borders do seem to coincide with significant differences in atmosphere. …Continue Reading 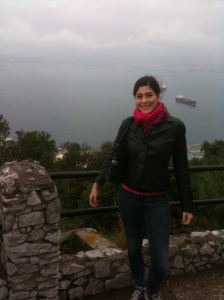 On the Rock of Gibraltar with Morocco in distant background, across the sea

Me with Wolly, my new Gibraltarian friend

Gibraltar concert hall in stalactite cave in the Rock

END_OF_DOCUMENT_TOKEN_TO_BE_REPLACED

Sorry to have neglected my blog all this time. I have mostly been shut up in my room working on grad school applications when I’m not in class or teaching at the orphanage. But I have some posts still to add from stuff I did a few weeks ago when I was more active, as well from more recently as I have started to get out again. Here goes my first catch-up post…

A few weeks ago, I visited the “Exotic Gardens Bouknadel” just outside of Rabat. Founded in 1951 by a French horticultural engineer, the gardens are considered a national treasure and blend exotic plants and birds from around the world, including Asia, Africa, Latin America, Andalusia, and Polynesia.

Gorgeous view in the garden